In 1891 Frank Rabb, working with his mother-in-law Maria Vicenta Vidal Stark, began work on the large two-story Victorian house that dominated high ground overlooking the Rio Grande, a few miles downriver from Brownsville. It was built at a total cost of $15,000.00. At the time, it must have been one of the grandest homes in the region making a statement of wealth and prosperity for 25 year old Frank Rabb and his new wife… a couple anxious to make their mark on society and politics of the region.

In the area around Santo Tomas the riparian landscape was dominated by a dense palm forest. Early Spanish explorers described miles of palms and called it “Rio de las Palmas.” These palms were more widespread south in Mexico but extended into the delta area. In this exceptionally biodiverse region, the palm forest is the most “tropical” in nature. At one time as many as 40,000 acres of palm forest lined the river. By the 20th century, the Rabb Plantation sheltered one of the last remaining small grove of native Sabal Palms (Sabal mexicana). This remnant core forms the nucleus around which sabal palm reforestation has occurred at Sabal Palm Sanctuary and remains the rarest and most distinct ecosystem in the Rio Grande Delta region. 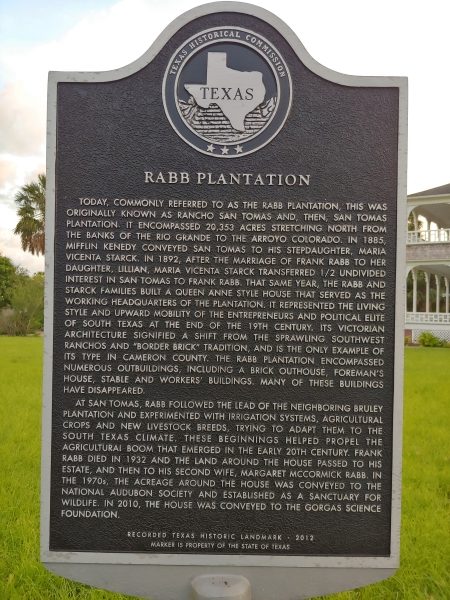